August 27, 2010 (by SMSgt. Larry Schneck) – The fleet of gray F-16 Fighting Falcons on the Luke Air Force Base flight line is in sharp contrast to a small group of blue-colored training aircraft that arrived earlier this month. 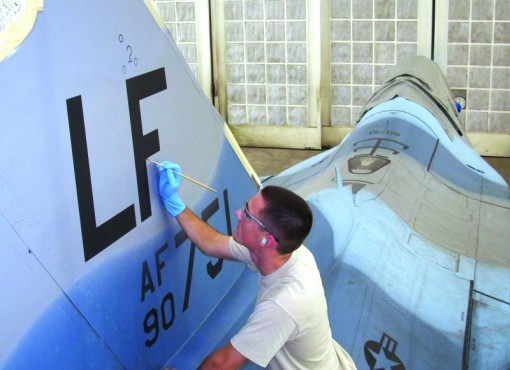 The 309th Aircraft Maintenance Unit has added five F-16s from Nellis Air Force Base, Nev., to its inventory of 27 aircraft.

“Right now they look like blueberries with the painting scheme of an aggressor aircraft,” said 1st Lt. Jennifer Rogers, 309th AMU officer-in-charge. “The blue camouflaged pattern helps pilots in training quickly identify the plane as an adversary, or aggressor, in the air.”

The jets transferred to Arizona as part of an ongoing realignment of aircraft Air Force-wide and are the same F-16 model currently in the 56th Fighter Wing inventory.

The five Nellis aircraft integrated into the 309th AMU fleet. The 309th will transfer two of its jets to the 308th AMU and two to the 310th AMU to even out the number of aircraft owned by the three AMUs in the 756th Aircraft Maintenance Squadron.

“What we’re doing right now is putting our tail flashes on them,” Lieutenant Rogers said. “Since they’re flown by Luke, we’re required to change the tail flash to the LF for Luke Field.”

“They want to fly the aircraft immediately, so we’re just replacing the letters for the base, so they can fly as-is,” said 2nd Lt. Holly Gramkow, 56th EMS Fabrication Flight commander. “Starting Monday they’ll fully repaint the five aircraft with the gray Luke scheme.”

The repainting from the blue camouflage to gray is a five-day process.

Airmen and Defense Department civilians in the corrosion control facility, called the paint barn, start with masking and sanding, and continue with priming each jet. That’s followed with applying a top coat of dark and light gray paint, then finish with the application of stenciled NATO markings and decals to fully identify the aircraft.

However, to get the Nellis F-16s into the air as soon as possible the corrosion control Airmen had to be creative.

“We don’t have the blue paint they use at Nellis, so they blended the gray into the existing blue paint to keep the integrity of the painting scheme,” Lieutenant Gramkow said.

Lieutenant Rogers anticipates repainting of the F-16s to be completed by the end of October.