By fcp2019November 13, 2013Honorary Commanders
No Comments Fighter Country Partnership is proud to feature Steve Bruflat, P.E., an alumni member of the Honorary Commanders Program and a Blue Blazer, formerly assigned to the 308th Fighter Squadron at Luke Air Force Base from 2004-2006.

Steve is a registered civil engineer in the State of Arizona and practicing businessman with five companies offering professional engineering services around the States of Arizona, Utah, Nevada and in the country of Qatar.

After spending his earlier life growing up in an Air Force family at bases around the U.S., Steve moved to Arizona in 1970 and has lived here ever since. Five of those earlier years and during his college years were spent on a working cattle ranch in Montana. Steve acquired his civil engineering education from the University of Hawaii and Arizona State University.

The last 17 years have been spent creating five successful civil engineering companies with his partner, John Patterson. These companies employ more than 200 technical professionals in the valley and around the various western states. They provide professional engineering services in construction inspection and management, surveying, construction material testing, and all phases of highway and freeway design to the local agencies and state governments. Mr. Bruflat is the Executive Vice President and Business Operations Manager and one of the co-founders for all of these companies.

A brief description of the Companies follows:

Transportation Consultant Engineers, LLC, (TCE) which specializes in the design of highways and freeways for the Arizona Department of Transportation.

Quality Testing, LLC, (QT) which specializes in the Quality control and Quality assurance testing of construction materials for roadway construction.

TRISTAR Engineering and Management, Inc. (TEAM) which specializes in construction inspection and management for the Local Municipalities and County Governments outside the valley. Tristar also performs engineering design services for transportation type projects.

CEI Qatar, WLL, which specializes in construction management and inspection services for the country of Qatar.

Mr. Bruflat has been involved in the design of the Loop 101 Freeway, The Squaw Peak Freeway – SR51, the divided highway improvements to Highway US 93 and the Payson Highway, SR 87. Steve was the Project Manager for the design on the West Valley’s Cricket Pavilion outdoor amphitheater.

Steve and his partner John are very proud of their creations and feel fortunate to be able to contribute to the welfare of the valley and the state of Arizona in such an influential way through the creation and improvement of the state’s transportation systems.

He knows the value of hard work, partnering with local communities, and working together to build strong relationships, for these qualities have lead to a successful career. He is an active member in the Institute on Transportation Engineers, The American Society of Civil Engineers and The American Consulting Engineers Council.

What is it like to be an Honorary Commander: 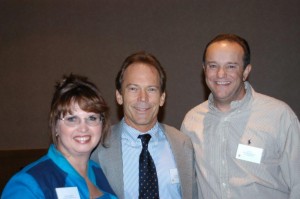 “It was an honor to be selected by General Phil Breedlove, former 56th Fighter Wing Commander, to participate in Luke’s honorary commander program. After being inducted as an honorary commander into the 308th Emerald Knights fighter squadron and attending my first F-16 pilot graduation, I understood the importance of being educated on the whole process that a pilot trainee goes through to get their his F-16 certification. It truly has been an honor to be part of Luke and help support the base mission. I get goose bumps every time I come out to the base and feel the power of the mission; to train the best F-16 fighter pilots in the world.”

When asked what it was like being assigned to the 308th Fighter Squadron, he explained, “Strength and Honor.” “It gave me a new sense of being young and strong; a new sense of confidence in our military; a new sense of feeling good from helping our service men and women out and especially being there to show the service personnel acceptance and approval for what mission they are on. It felt important to me to help them.”

Mr. Bruflat went on to say, “I went through three squadron commanders and got to see each one’s different style of leadership giving me take “aways” for my civilian job. These fine men were Lieutenant Colonels John “Old Man” Sieverling, Doc Ellis and Ken Lacy. The personnel of the 308th always made me feel accepted and welcome to participate in their many activities. They even gave me the call sign “Hef.”

Steve got to experience first-hand what an F-16 strafing run on a target at the Barry M. Goldwater Range is like watching from an observation tower at the range getting a great perspective observing from the ground the power and precision the pilots flying these aircraft have. “Flying the F-16 simulator as well as receiving a once-in-a-life-time orientation flight in the F-16 were definitely highlights of my term. The single most memorable and by far the most exciting thing I have ever done to date was fly the F-16. Up to that time it had been to drive NASCAR’s, but the F-16 experience topped the 150mph NASCAR experience. When I watch my flight video even today my body tenses up before each high G-turn like I was really experiencing the forces again. I use this experience to help educate the community on Luke’s mission and how important it is to our nation.”

The Honorary Commanders program is designed to promote mutual partnerships with the local community and to promote a better understanding of the important Air Force mission. According to Mr. Bruflat, this program is achieving that goal. Steve Bruflat gives a thumbs up before take-off

“Look at the last two major public support programs for eliminating Luke from the Base Realignment and Closure list and the overwhelming support for the new F-35 mission to be accepted at base. These two major events showed what great support the base has with the community because citizens like me and others were educated on Luke’s value.”

“My association with the base has been a rewarding feel-good experience because it afforded me a way to help out the men and women of Luke socially and financially in ways they need; not taking away from the Air Force caring for their own concept.”

“My connection with the base has always given me a good warm feeling. The men and women of Luke are helping to maintain and defend the basic freedoms and our American way of life. I appreciate them for this role. Just our Air Force being there has an impact of keeping the bad guys off our soil and under control.”

Mr. Bruflat has contributed greatly to the base as well as to Fighter Country Partnership. He hosted several catered squadron holiday parties at his home with over 90 squadron members and their families attending—giving these airmen the feeling of being a part of the community. Steve coordinated and led efforts for the honorary commanders to host a farewell dinner honoring then 56th Fighter Wing Commander, General Breedlove. He helped with donations to “Operation Warmheart”, “Operation Thunderbox”, the Airmen’s Attic and many more programs. As a Blue Blazer, he helped with the Fighter Country Partnership’s annual golf event which raises money for Luke’s Airmen and their families—the largest fund-raising event for FCP.

“I have learned so much about the importance the base plays in our lives and the importance and impact Luke has on our community. The base is much more than just the annual $2 billion economic impact it has the local economy. It’s about our nation’s security. The community has a duty to support Luke and its mission.”

A Story of Thanks and Appreciation from the Middle East:

“I traveled to the Middle East back in 2008 prior to the most recent uprising and political changes and experienced a most wonderful thing in Egypt that I would like to say about being “an American.” My travels took me to Dubai and Qatar for business purposes along with an opportunity to visit Egypt and attend a wedding for a member of an employee’s family. I choose to go since I would have local people showing me around Egypt; the Pyramids, the Sphnyx, the Cairo museum of history. While I was in Cairo we stayed at the downtown Cairo Hilton Hotel on the Nile River. One night I got on the elevator on the first floor to go to my room on the 23rd floor. The elevator was empty when I got on, but on the way it stopped on the 2nd floor and let on two Arab men dressed in the traditional white thobe and shumagg/ogal. One of the Arab men looked at me and asked, in good English, if I was an American. I said yes I am an American. He put his hand out to shake mine and said “I want to thank you very much for what your country did for mine. I am Kuwaiti and you saved our lives. I am personally grateful.” Wow! This should have been on CNN. Kuwait’s war was over 17 years ago and they are still grateful. And as you may remember, that was primarily an air war fought by F-16 and A-10 pilots. Many of those pilots were trained at Luke Air Force base. Makes your heart feel good.” When asked about Fighter Country Partnership and being a member of the Blue Blazer Squadron of FCP, Steve explained that the major enjoyable and rewarding factor being an active member is being part of an elite group of dedicated committed people who support our air force and base.

“They support the American way of life and we are all on the same page about this. These are great people to be around and are very capable to bringing good things to the table for the men and women of Luke.”

“I get a good feeling knowing that the Blue Blazer Squadron was some of the first people to be part of the honorary commander program at Luke and we all made it happen. I feel an honor being part of this group who continue to support, beyond ordinary efforts, the mission of the base and the folks at Luke. We can help make a difference and help the service people feel good about their service to our great country. FCP is great group of people doing an awesome job to support the Luke men and women and their families unselfishly. Their efforts are all donated time and money. Again this is an honor for me to be associated with such a great group of dedicated people in support of our military.”

One last tip from Mr. Bruflat is to always go out of your way to personally thank our service personnel in uniform whenever the opportunity presents itself. The personal acknowledgment goes a long ways to encouraging the morale of our service members.