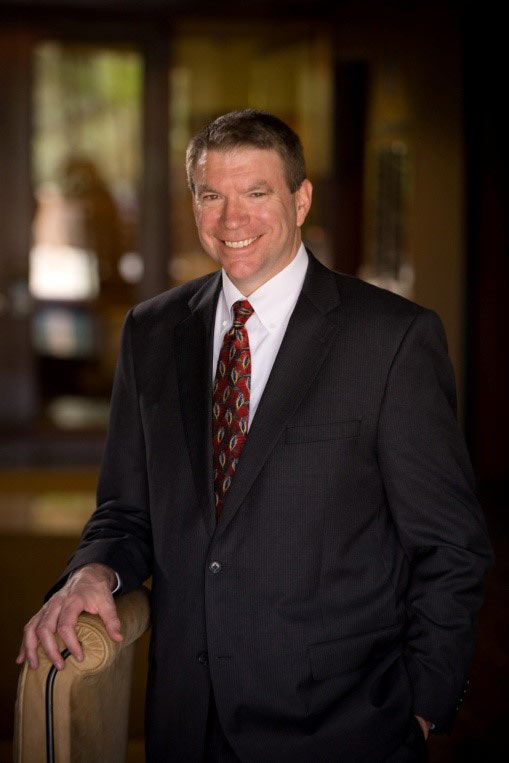 As President, Mr. Freericks is responsible for strategic management and leadership of DMB’s Arizona activities. He has over 17 years of experience with the company, including executive leadership roles and overseeing master planned community and commercial development operations.

For over 30 years, DMB has been developing properties and communities that respect the land and enrich the lives of our residents and value for our stakeholders. As a diversified real estate investment and development firm, DMB has property holdings that include primary residential and resort/recreational communities, signature commercial developments, health clubs and spas in Arizona, California, Utah and Hawaii.

Mr. Freericks is an active contributor to Arizona organizations that enhance our community and business environment, including serving as board member and past chairman with Fighter Country Partnership (Luke Air Force Base), and several industry associations.

Prior to joining DMB in 1997, Mr. Freericks served as President of Talley Realty Group, a real estate development and finance division of Talley Industries, Inc. (NYSE), where he worked from 1989 to 1996. His background in real estate also includes serving as Senior Marketing Consultant for Grubb & Ellis Commercial Brokerage Services in Phoenix.

Originally from Fairbanks, Alaska, Mr. Freericks has been in Arizona since 1979 and currently resides in Scottsdale with his wife Cathy. He has two college-age children Carter and Alexandra.

When asked what it was like being an Honorary Commander at Luke AFB, he explained, “It is a tremendous opportunity that had a profound impact on me. As a civilian, spending time over a couple of years working and experiencing life with an Air Force officer or senior enlisted person is really a special and unique opportunity. Getting to know them and their families, and seeing what life is like in the USAF changed me in ways I could not have imagined. It re-inspired me as a patriotic American and gave me a new and great respect for those men and women who serve our country.” Charley Freericks climbs aboard an F-16 Fighting Falcon during his orientation flight at Luke AFB.

The Honorary Commanders program provides a unique opportunity for a selected few community leaders to learn about the mission and people of Luke AFB, as well as the Air Force and the Department of Defense as a whole.

“I have a deep appreciation for the base, U.S. Air Force and Luke since my exposure as an Honorary Commander. I appreciate the importance the base has to the region, Arizona and the West Valley, both as an employer and as an economic engine. I also have a deep respect for the contributions the people of Luke make to our community,” Mr. Freericks said.

“Additionally, Luke plays a big role in our overall national defense. I learned that Luke AFB is a powerhouse in training pilots for the United States and our allies – 90 percent of the world’s F-16 pilots were and are trained here and the same will be true for the F-35.”

“During the campaign to secure the F-35 mission for Luke I learned that Arizonans overwhelmingly support Luke, our “Hometown Air Force Base!”

“I know without question that the U.S. Air Force is the most dominant military machine in the world. The team goes in and out, completing missions effectively and efficiently, rarely losing equipment, people, or ground. After touring parts of the Persian Gulf on a DOD trip, I made the statement that nothing without feathers flies in the Middle East without permission from the US Air Force. I’m really glad they are on our side.” Charley Freericks giving a cheer from the back seat of the F-16 during his orientation flight.

The Honorary Commanders program is designed to promote mutual partnerships with the local community and to promote a better understanding of the important Air Force mission. Its goal is to gain positive public opinion with influencers. Mr. Freericks believes that the program is meeting its goal.

“I also feel strongly that you get out what you put into this program. And it goes both ways. If either party in this partnership, the civilian or the airman, doesn’t put much into this relationship, both sides fail. But if you put in the time, it is mutually beneficial and produces long-term impacts and friendships.”

“For me personally, I found the two-year program so rewarding that almost eight years later, I’m still in contact with the friends I made during the program. In fact, my entire family recently visited Germany and stayed with friends who were assigned there after Luke. During the trip we visited with my former Honorary Commander who was in Germany too.” Charley Freericks receives a special gift of a 20mm F-16 gun barrel from Luke AFB for his outstanding support to the base.

“The strength of this program is that not only was I exposed to life in the military, but the Air Force folks get to learn more about life as a civilian. Many of the leaders at Luke are getting close to retirement which happens pretty young in the Air Force. This program helps them start thinking about life after the Air Force. I have had the privilege to work with many to share ideas, advice and relationships to help make the transition into the private sector.”

“One of the best parts of the program is the social aspect,” Mr. Freericks said. “I have been able to do all kinds of things with my Honorary Commanders outside of Luke business and community events, to include concerts, parties, hockey games, family gatherings. Basically, I included them as part of my extended family. I’ve been to all kinds of formal events, graduations, retirements and sadly funerals – we were at war during my experience.”

“We attended Luke Days Open House and Air Shows and I was there when the first F-35 arrived! I had the unique experience of having an extended honorary commander experience to bridge the time for Luke Forward – the F-35 campaign. Ultimately I got to serve with four Commanders each with distinct experiences.”

Mr. Freericks has been one of the strongest supporters of Luke and Fighter Country Partnership for nearly a decade. His contributions are numerous.

“I have been able to participate in the Honorary Commander program, and I went on to serve on the Board at Fighter Country Partnership which provides a lot of support to the Base and its people. During my tenure, I am most proud of my role as co-chair of the Luke Forward Campaign with Mayor Scruggs. This was an incredible and successful grassroots campaign to win the F-35 school house mission. Being awarded this mission should secure Luke for 40-60 years as a vital piece of the U.S. Air Force strategy and plan. I chaired Fighter Country Partnership and still serve on the Board. I believe in the mission of this organization, supporting the men, women and families of Luke. On a very personal level, I have been “pen pals” with some of the folks that got deployed to Iraq and Afghanistan. There is nothing better than a Skype session to check in with friends a long way from home.” Charley concluded, “The Honorary Commander’s program had a profound impact on me. It re-inspired me as an American and introduced me to an entire community of people with values and integrity. It gave me new and great respect for those men and women who serve our county.”

“There was a time when the future of FCP was in the balance, and without the efforts and leadership of Mr. Freericks, we wouldn’t be having the successes we are today. For that, Luke AFB, the community and FCP are forever grateful!!!”